Editor’s Note: This Economist article is republished on the Next Society website for educational purposes.

The Economist – THE new economy may or may not materialise, but there is no doubt that the next society will be with us shortly. In the developed world, and probably in the emerging countries as well, this new society will be a good deal more important than the new economy (if any). It will be quite different from the society of the late 20th century, and also different from what most people expect. Much of it will be unprecedented. And most of it is already here, or is rapidly emerging.

In the developed countries, the dominant factor in the next society will be something to which most people are only just beginning to pay attention: the rapid growth in the older population and the rapid shrinking of the younger generation. Politicians everywhere still promise to save the existing pensions system, but they—and their constituents—know perfectly well that in another 25 years people will have to keep working until their mid-70s, health permitting.

What has not yet sunk in is that a growing number of older people—say those over 50—will not keep on working as traditional full-time nine-to-five employees, but will participate in the labour force in many new and different ways: as temporaries, as part-timers, as consultants, on special assignments and so on. What used to be personnel and are now known as human-resources departments still assume that those who work for an organisation are full-time employees. Employment laws and regulations are based on the same assumption. Within 20 or 25 years, however, perhaps as many as half the people who work for an organisation will not be employed by it, certainly not on a full-time basis. This will be especially true for older people. New ways of working with people at arm’s length will increasingly become the central managerial issue of employing organisations, and not just of businesses.

The shrinking of the younger population will cause an even greater upheaval, if only because nothing like this has happened since the dying centuries of the Roman empire. In every single developed country, but also in China and Brazil, the birth rate is now well below the replacement rate of 2.2 live births per woman of reproductive age. Politically, this means that immigration will become an important—and highly divisive—issue in all rich countries. It will cut across all traditional political alignments. Economically, the decline in the young population will change markets in fundamental ways. Growth in family formation has been the driving force of all domestic markets in the developed world, but the rate of family formation is certain to fall steadily unless bolstered by large-scale immigration of younger people. The homogeneous mass market that emerged in all rich countries after the second world war has been youth-determined from the start. It will now become middle-age-determined, or perhaps more likely it will split into two: a middle-age-determined mass market and a much smaller youth-determined one. And because the supply of young people will shrink, creating new employment patterns to attract and hold the growing number of older people (especially older educated people) will become increasingly important.

The next society will be a knowledge society. Knowledge will be its key resource, and knowledge workers will be the dominant group in its workforce. Its three main characteristics will be:

•Borderlessness, because knowledge travels even more effortlessly than money.

•Upward mobility, available to everyone through easily acquired formal education.

•The potential for failure as well as success. Anyone can acquire the “means of production”, ie, the knowledge required for the job, but not everyone can win.

Together, those three characteristics will make the knowledge society a highly competitive one, for organisations and individuals alike. Information technology, although only one of many new features of the next society, is already having one hugely important effect: it is allowing knowledge to spread near-instantly, and making it accessible to everyone. Given the ease and speed at which information travels, every institution in the knowledge society—not only businesses, but also schools, universities, hospitals and increasingly government agencies too—has to be globally competitive, even though most organisations will continue to be local in their activities and in their markets. This is because the Internet will keep customers everywhere informed on what is available anywhere in the world, and at what price.

This new knowledge economy will rely heavily on knowledge workers. At present, this term is widely used to describe people with considerable theoretical knowledge and learning: doctors, lawyers, teachers, accountants, chemical engineers. But the most striking growth will be in “knowledge technologists”: computer technicians, software designers, analysts in clinical labs, manufacturing technologists, paralegals. These people are as much manual workers as they are knowledge workers; in fact, they usually spend far more time working with their hands than with their brains. But their manual work is based on a substantial amount of theoretical knowledge which can be acquired only through formal education, not through an apprenticeship. They are not, as a rule, much better paid than traditional skilled workers, but they see themselves as “professionals”. Just as unskilled manual workers in manufacturing were the dominant social and political force in the 20th century, knowledge technologists are likely to become the dominant social—and perhaps also political—force over the next decades.

Structurally, too, the next society is already diverging from the society almost all of us still live in. The 20th century saw the rapid decline of the sector that had dominated society for 10,000 years: agriculture. In volume terms, farm production now is at least four or five times what it was before the first world war. But in 1913 farm products accounted for 70% of world trade, whereas now their share is at most 17%. In the early years of the 20th century, agriculture in most developed countries was the largest single contributor to GDP; now in rich countries its contribution has dwindled to the point of becoming marginal. And the farm population is down to a tiny proportion of the total.

Manufacturing has travelled a long way down the same road. Since the second world war, manufacturing output in the developed world has probably tripled in volume, but inflation-adjusted manufacturing prices have fallen steadily, whereas the cost of prime knowledge products—health care and education—has tripled, again adjusted for inflation. The relative purchasing power of manufactured goods against knowledge products is now only one-fifth or one-sixth of what it was 50 years ago. Manufacturing employment in America has fallen from 35% of the workforce in the 1950s to less than half that now, without causing much social disruption. But it may be too much to hope for an equally easy transition in countries such as Japan or Germany, where blue-collar manufacturing workers still make up 25-30% of the labour force.

The decline of farming as a producer of wealth and of livelihoods has allowed farm protectionism to spread to a degree that would have been unthinkable before the second world war. In the same way, the decline of manufacturing will trigger an explosion of manufacturing protectionism—even as lip service continues to be paid to free trade. This protectionism may not necessarily take the form of traditional tariffs, but of subsidies, quotas and regulations of all kinds. Even more likely, regional blocks will emerge that trade freely internally but are highly protectionist externally. The European Union, NAFTA and Mercosur already point in that direction.

The future of the corporation

Statistically, multinational companies play much the same part in the world economy as they did in 1913. But they have become very different animals. Multinationals in 1913 were domestic firms with subsidiaries abroad, each of them self-contained, in charge of a politically defined territory, and highly autonomous. Multinationals now tend to be organised globally along product or service lines. But like the multinationals of 1913, they are held together and controlled by ownership. By contrast, the multinationals of 2025 are likely to be held together and controlled by strategy. There will still be ownership, of course. But alliances, joint ventures, minority stakes, know-how agreements and contracts will increasingly be the building blocks of a confederation. This kind of organisation will need a new kind of top management.

In most countries, and even in a good many large and complex companies, top management is still seen as an extension of operating management. Tomorrow’s top management, however, is likely to be a distinct and separate organ: it will stand for the company. One of the most important jobs ahead for the top management of the big company of tomorrow, and especially of the multinational, will be to balance the conflicting demands on business being made by the need for both short-term and long-term results, and by the corporation’s various constituencies: customers, shareholders (especially institutional investors and pension funds), knowledge employees and communities.

Against that background, this survey will seek to answer two questions: what can and should managements do now to be ready for the next society? And what other big changes may lie ahead of which we are as yet unaware?

Omnicracy is the equal power of all, over all that concerns the fundamental interests of all.

Much more can be said about omnicracy. Contact us for more interesting conversations.

Add the #NextSociety picture frame to your FB profile picture. Spread the word.

COPY AND PASTE THIS TEXT IN YOUR NEW PROFILE PICTURE’S DESCRIPTION BOX. 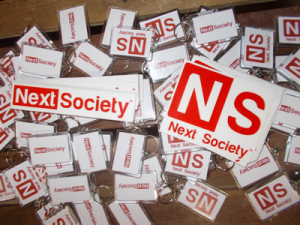 Next Society merchandise will soon be available again! Be part of our Design, Promo and Merchandise Teams. Click here for more details.